Slightly behind the eye of the Beholder

I’ve been on the road a lot, lately.

Two weeks ago, it was RWA in Orlando. And then, after four days of staggering around my house in a daze, it was into the car and off to Indianapolis for a family vacation at Gencon.

That last is kind of an exaggeration. There are a lot more women at Gencon than there used to be. But since it Gencon is a gaming convention that originally centered on Dungeons and Dragons and war games, men are still a healthy majority there.

For me, it meant that I did a week where I bought highlights for my hair and extensions for my eyelashes, got the manicure and the pedicure, matched the shoes to the bag, and was generally on my best behavior. And followed it up with a long weekend where I did my level best to wear a clean shirt a nd comb my hair.
I was beyond low key in Indy, since I was there to relax. And although a few people now actually recognize me when I go to RWA–

(Yes, that was my first book cover, up on the jumbo-tron during the RITA ceremony as a published Golden Heart winner. And yes, that made me tear up, big time, since five years later, that is still one of the biggest thrills in the world)

–no one knows me at Gencon. I am definitely not the family celebrity there. This year, that honor goes to #2 son.

He packed a costume.

I told him that we did cosplay, back before they even called it that. Middle age spread, and the royal pain in the ass it has become to get luggage through an airport has put a big crimp in the Merrill’s costume wearing.
But #2 has found his niche, and a costume that is easy to pack.

Last Friday, he was Waldo, and everyone in the Indianapolis Convention Center noticed it. Everywhere he went, we heard, “I found him!” “There he is!” and “Hey Waldo, can I have a picture?”

Someone threatened to circle him, and spoil it for everyone.

Also, he was a babe magnet. He got many hugs from many strange women. #1 was most annoyed.

But #1 wasn’t the only one affected. Outside the door to the Will Wheaton Q & A, we came face to face with an excellent Michael Myers from the Halloween movies. Under normal circumstances, Michael would have been the center of attention. Instead, everyone made a B line for Waldo, and grabbed for their cameras.

I have never seen a superhuman homicidal maniac look so despondent.

Of course, any pictures of Waldo in the foreground aren’t really accurate. He needs to be hard to find. Kind of like this. 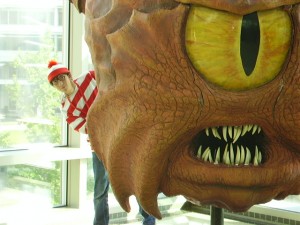