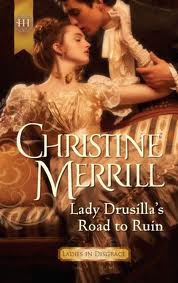 John Hendricks took a sip from his flask and leaned back into his corner of the northbound mail coach, stretching his legs in an effort to take up as much space as he could before another passenger encroached on his person. After the week he’d had, he was in no mood or condition to be packed cheek to jowl with strangers.

Mr Hendricks, if there is something else you have to say on your hopes for my future, know that I decided on the matter from the first moment I laid eyes on Adrian Longesley. Nothing said by another is likely to change me on the subject.

The words were still ringing in his ears, three days later. And with each repetition of them the heat of his embarrassment flared anew. The woman was married, for God’s sake, and above his station. She’d made her uninterest in him plain enough. If he’d suffered in silence, as he had for three years, he could have kept his job and his pride. Instead, he’d been so obvious in his infatuation that he’d forced her to speak the truth aloud.

He took another swig from the flask. If the blush on his cheeks was visible in the darkness, better to let the others think it was from drunkenness and not the shame of unrequited love.

Adrian had known all along, of course. And would have allowed him to continue as a part of the household, if he’d not made such an ass of himself. But once it was out in the open, there was nothing to do but give up his position and slink away from London.

John’s feelings for his old friend rose in a tangle of jealousy, pity and embarrassment at his own behaviour. Despite all that had happened, he liked and respected Adrian, and had enjoyed working for him. But what did it say of his own character that he’d even consider stealing the wife of a man who would need her support and unwavering love as the last of his vision faded?

And how foolish did it make him to think that Emily would leave a blind earl for an unacknowledged natural son? He might have been an equal to Lord Folbroke in looks and temperament, but he had no rank, no fortune. And though his sight was better than Adrian’s, he could hardly call it perfect.

John slipped the flask into his pocket and removed his spectacles to give them a vigorous wipe. There was not a woman alive who would leave her husband for a man whose only asset was marginally better vision.

He stared sullenly through the cleared lenses at the two people on the seat opposite as though daring them to comment about his earlier drinking. When he had bought the ticket, he’d had some hazy idea that travelling to Scotland would be like venturing into the wilderness. It would be a place to heal the soul and the nerves in quiet and solitude. He had not allowed for the fact that, to arrive at this hermit’s paradise, he would be crammed into a small enclosure with the very humanity he despised. They had been rattling about the interior of the conveyance like three beans in a bottle for hours already. He felt the impact of each bump and rut in his bones, his teeth and his aching brain. The swaying of the coach was made even worse by the gusting winds and the rain that hammered the sides and tried to creep in at the poorly sealed window on his right, wetting the sleeve of his coat when he tried to relax against the curtain.

He thought of the coaching schedule, forgotten in his pocket. It was over thirty hours to Edinburgh and he suspected that, with the wet roads and the gathering darkness, it would take even longer than normal. Not that it mattered to him. He was his own man now, with no schedule to keep.

He wished that the thought cheered him. Thank God that he was still half-drunk. When the last effects of the alcohol had gone from his system, they would be replaced by the panic of a man who had destroyed his old life.

Hung over was no way to start a new one. But when he’d gone to the Swan with Two Necks, trying to buy a ticket out of London, he had been several gins past the point of making that decision and would now have to live with the consequences.

‘Beastly weather we are having.’ The man across from him seemed to think that stating the obvious was a witty opening gambit.

John ignored him. He’d been forced to leave London because he had said far too much to his employer. That did not mean he wished to blurt every thought to strangers.

The woman that shared the coach with them seemed to have similar sentiments. At the sound of the man’s voice, her skirts rustled and she clutched the book of sermons she had been reading, bringing it closer to her face to catch the flickering light of the reading lamp in her corner.

John saw her give the slightest flinch as the other man turned his attention to her. ‘Travelling alone, miss?’

She looked up long enough to give the man next to her the frosty glare of someone who did not answer to those to whom she had not been properly introduced. Then she returned to her book.

But the man who addressed her was undeterred. ‘Because I would be happy to escort you to your destination.’ Although there was plenty of room in the body of the coach, he’d made a point of choosing the seat next to the young lady and tended to use each swerve and jostle as an excuse to crowd her. Now, he was definitely leering.

John had a moment’s concern that she might be naive enough to accept the man’s offer out of hand. Then he dismissed it as none of his business.

Her skirts gave another rustle as she drew them tightly to her legs, as though trying to shrink herself enough to minimise contact with the stranger. But that would be near to impossible, for she was of an uncommon height. She did not seem to realise that the movement of the cloth over her legs outlined areas of her body that the man accosting her found most interesting.

As did John, come to that. They were long legs, to match the length of her body. If they matched the small amount of ankle he glimpsed beneath her skirts, they were well shaped. A pity the girl was so Friday-faced. If she’d smiled, she might have been quite pretty.

Though her expression hinted that she was travelling to a funeral, her clothing did not. Bright colours suited her fair skin and the deep blue of her gown made her brown eyes seem even darker. The fabric was expensive, but the cut was conservative, as though she renounced fashion when it impinged on movement or modesty. Her long, black hair was dressed severely away from her face and hidden under a poke bonnet.

If John had to guess, he’d have said spinster. Clearly, this was a girl with money, but no prospects. It was a very unusual combination, for the former often created the latter. But reading sermons in public hinted at a moral propriety that would make her unpleasant company, should she deign to open her mouth.

Her dark eyes caught his, just for a moment. In the dim light they seemed to glitter sharp and dark, like the eyes of a hawk.

Had she spoken? Or had he just imagined the words, planted firmly in his brain? Surely, if they had come from her, there would have been some softness in them, some urgent courtesy in their appeal to a stranger for help. The command was an invention of his own drunken mind.

‘It is quite lonely,’ the other man announced, ‘to travel without a companion of some kind.’

A merchant, thought John, for he could not seem to resist speculating about the other passengers. And a prosperous one as well. The man could afford his extra weight, for the fabric of the vest stretched across the bulging stomach was a fine brocade. But his head seemed to be outgrowing his hair, which struggled to conceal an expanding forehead that the man now mopped in the early summer heat. He spoke again, addressing the girl, who had not responded to his earlier comment.

‘Is there someone waiting to join you at the next stop?’ He was eyeing her carefully to see if there was some small acknowledgement that she was not as alone as she appeared.

John looked as well and saw no such response. The mystery deepened.

Her eyes flicked to him again, and then away, sharp and quick as a knife cut.

Well, indeed. The only advantage of being a gentleman of leisure was that he did not have to be at the beck and call of anyone. Not even young ladies with large dark eyes and forbidding expressions. It was ungentle-manly of him, but so be it. If nothing else, the last few weeks should have taught him not to become embroiled in the schemes of beautiful women who, in the end, would offer nothing more than dismissive thanks as they rushed past him to the object of their desire.

Very deliberately, he yawned and closed his eyes, pretending to sleep. Then he opened them just enough so that he could continue to watch his companions.

There was a flash of lightning, followed close by a crack of thunder loud enough to make the other man jump in his seat. But the woman was unmoved and the cold white light threw the annoyance on her features into sudden sharp relief.

Do you mean to allow this?

When John did not respond, she turned to look at the man next to her. The merchant was impervious to whatever messages she was sending or he’d have turned to dust in his seat before speaking again. This time, he was louder, as though he thought she might not have heard him before. ‘I said, is there someone to greet you at your destination?’ John watched the flicker of truth on the face of the girl that admitted she had no one.

Their companion saw it as well. ‘I noticed, at the last stop, that you did not eat. If you lack funds, you needn’t fear. The Cap and Bells does a fine joint. I would be only too happy to share my portion with you. And perhaps a brandy and hot water, to keep away the chill.’

Then he’d offer to share his room as well, John had no doubt. The fine example of London citizenry across the coach from him was on the make for a bedmate. Without someone to aid her, the man would grow more predatory the farther they got from town.